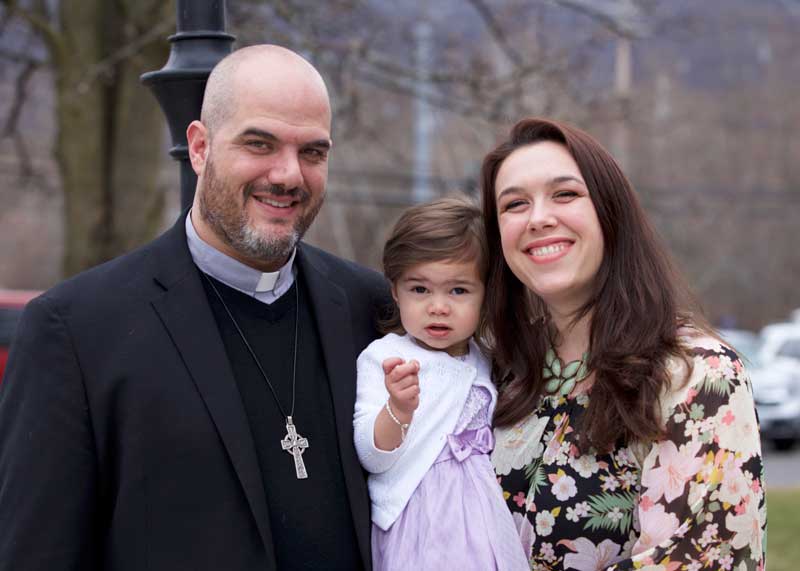 Greetings, I write this letter to give you a brief history of how I came to the wonderfully-blessed place of being Pastor of Salem Tabernacle.

I was born on September 9, 1982 into a Christian home in Peekskill, NY. My parents raised me in church, told me from a young age they felt I was called to pastoral ministry, and even tearfully prayed me through a few wayward years. God answers prayers!

In 1997, my brother Frank who plays bass, on the worship team here at Salem, (called the Oasis at that time), invited me to hear the worship team record a live CD called Send the Fire. I enjoyed what I heard, but would not return for three years. I had no idea that a fire would start that day and would grow into an inferno over the next twenty years.

In 2000, I returned and attended a service led by a guest minister named Marvin Gorman. At the end of the evening service, he called all the youth, twenty years old and younger to come to the front. He asked us, “Who here is called to be in the ministry?” I did not raise my hand for fear that my family would see, and I would then be held accountable forever. He said, “One of you refuses to raise your hand because you don’t want anyone to know.” Upon hearing this, I raised my hand immediately, and he looked at me and said, “I knew from when I saw you that you are called to be in the ministry. Start living worthy of the call.” With that, the fire God sent in 1997 began to grow hot.

In 2007, after years of first attending and then helping to run the youth ministry, I was wrestling with my involvement in the church and really, looking back, my faith. I have learned since then that there is faith in wrestling with doubt. Praise God! I walked out of the church one cold February night and began warming up my car. Our then assistant pastor, Mark Aarstad, was also warming up his car. I asked if I could sit with him for a while. We talked. I poured out my heart to him, and he opened his heart up to me. That night, for me, I was Lazarus being called out of the tomb, and the fire God sent in 1997 grew hotter still.

I met my wife, Jacolyn, over the years at church, and we worked together in ministry for a while. As I like to tell the story, I found out she liked me and asked her dad’s permission to date her. After four years of dating, I asked her to marry me, and we were married one year later in 2010. Ironically, the temperature was 105F on our July wedding day – that fire from 1997 was blazing prophetically! I was married to a woman I loved, discipled by a pastor who meant the world to me, and was a minister in a church I would die for.

Pastor Mark and I grew into a relationship that modeled textbook discipleship. He allowed me into his everyday life and began revealing Jesus to me in song, Scripture, and people. Years went on, and I grew. I became the youth pastor of Salem Tabernacle, and Pastor Mark became the senior pastor in 2011. This church was the hub of my walk with Christ, and my obsession with Jesus fanned into flame as the years whipped past. I could not imagine ever attending another church, because the fire that was sent in 1997 refused to slow down, yet the plan was that one day I would leave Salem to start a daughter-church. I could not imagine anything more blessed than to continue the name of Salem in another location. What an honor! However, I had no idea what God had in store.

Pastor Mark asked me to become the assistant pastor of Salem Tabernacle in 2015. Through tears streaming down my face, I told him it would be an honor, and I was placed in charge of all the department ministries. I was now the assistant pastor, just like Pastor Mark was when we talked in 2007. Again, what an honor! I worked hard for two years to help our excellent volunteers do what they do best, and we had a great time doing it. God was preparing me, and I didn’t even know it. As Oswald Chambers once said, “God will beat you into the shape of the vision He has for you.” It was work. Discipleship is work. Hard work. Painful work. But holy work. The fire that God sent in 1997 was blazing out of control by now.

Then, in 2016, our beautiful daughter, Sophia Evangeline, entered the world. We moved to Beacon from Fishkill, NY in 2017 to get into a bigger space for our growing family, and then, concurrently, my life changed again. Pastor Mark met with me and told me that he and his wife were heeding the call of God, much like Abraham, to venture into the unknown, move to Tulsa, OK, and become intimately involved in a church there named Sanctuary Tulsa. As much as this hurt, I was watching Pastor Mark do what he taught me to do for the better part of ten years – follow Jesus, trust Him, deny himself, and be adventurous. I was shocked. The shock grew as he told me that he would like me to pastor Salem Tabernacle upon his departure. The church elders officially offered me the position, and the church where I was baptized, called into the ministry, married, licensed to preach, and preached for the first time would now become the church I pastored for the first time. I sit here now, married for almost seven years, a baby who is going on a year, as pastor of the greatest church I have ever known.

Pastor Mark is following God because God sent the fire, the Spirit, into his life. I walked into Salem in 1997 to hear a live recording of a CD whose name would mark a moment for me, Send the Fire. God sent the fire into Pastor Mark, that fire was sent into me, and it burns now with passion for God and His Son Jesus in the power of The Holy Spirit. I pray that God sends that same fire into you. I pray that everyone who lives a life in the Spirit of the Triune God would look back over the years and see an impossible story being played out in possible ways. My prayer and hope for Salem Tabernacle is that she would be a place where God sends the fire of His Spirit into our lives, communally and individually, and we would all experience “Life as God meant it to be.”